After our visit to the new Apple Store in San Francisco, we thought it would be rude not to visit the true home of Apple itself, so off to San Jose we went…

Only a short drive from San Jose Airport, we found ourselves at the Headquarters of Apple, 1 Infinite Loop, Cupertino, California, one of the most exclusive buildings in the world. Infinite Loop is the name given to the street on which the 6 different Apple campuses are situated, it is a U-shaped crescent that joins up with Mariani Avenue to form the full loop.

There is certainly a buzz around the whole area, endless amounts of people are going about their duties, dressed smartly, macbooks in hand, deep in conversation with colleagues. We notice many of them wearing the security ID’s around their necks. There’s no chance we will be able to enter any of the campuses but what we can do is visit the Apple Store here, the only one in the world to sell certain types of merchandise, and that’s what we’re here for!

After a long wait to get a parking space in the car park we head over the 1 Infinite Loop in the side of which the Apple Store is located. From the outside the store doesn’t look particularly special, it’s all on one level with the same glass frontage as many of the other stores. Staff, all wearing the Apple green t-shirts, are on hand to greet us as we enter and we see the same familiar tables decked with apple watches, iphones, macbooks etc.

The very rear of the store is home to the much talked about merchandise, it takes us a while to get anywhere near anything however due to the large crowds but when we do we spot pens, flasks, t-shirts, mugs and notebooks of the paper variety.

The merchandise is flying off the shelves, tourists all desperate to take their token memorabilia to take home with them, so we follow their lead grabbing one of each of the 3 coloured mugs on offer (grey, white and greenish blue), 2 white t-shirts and a rose-gold pen. As will all Apple merchandise it doesn’t come cheap, $185 later we exit the store, bags in hand.

The staff are as pleasant and helpful as always, but the store itself, we felt, had no wow factor. However, if it’s a piece of Apple merchandise you’re after for a special gift or just to treat yourself, it’s definitely worth a visit.

We also caught a glimpse of the new Apple HQ 2 being built. This second campus, being built to compliment 1 Infinite Loop, is due to open in 2017 and it is said that all of the 2017 launches will take place from this new building. Keep your eyes on our blog to hear all about the new campus… 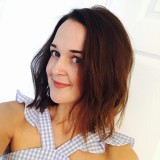